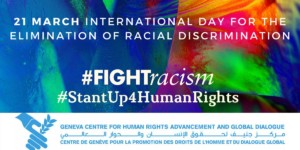 1 March 2020, GENEVA – The 2019 coronavirus pandemic, which was first reported in December 2019 in Wuhan, China and ever since has kept spreading all over the world, has led to increased discrimination, prejudice, violence, and racism against Chinese people and people of East Asian and Southeast Asian descent and appearance.

A growing number of people having links to China, Vietnam, Malaysia, Japan, Thailand, South Korea and other countries are reported to having been subject to racist treatment in recent months. To date, instances of discrimination, racism and harassment prompted by the coronavirus outbreak, including assaults, insults and boycott of businesses, were recorded in at least 33 countries, among which France, Germany, United States, Saudi Arabia, Egypt, Brazil, Bolivia, India and Russia.

The Geneva Centre is highly alarmed by this disturbing wave of racist attacks against people from East-Asian countries or fellow Asian-looking citizens. On the International Day for the Elimination of Racial Discrimination, the Geneva Centre’s Executive Director, Dr Umesh Palwankar, stressed that the Covid-19 public health concern will never be solved with fear and discrimination. When people are attacked, physically, verbally or on social media because of their race or ethnicity, all of society is diminished, he said.

The Geneva Centre strongly condemns the growing Xenophobic – including Sinophobic, anti-Italian, anti-Iranian and others – rhetoric in political discourses. The Geneva Centre in this regard encourages ethical journalism and calls for accelerated global solidarity. It is time for people in all countries to engage in dismantling the rampant ignorance and harmful misinformation, as well as to fight virus-spawned hate speech.

In these grim days, it is crucial for everybody to join hands, stand up against racial prejudice and intolerance, and defend the fundamental principles of equality and human dignity.