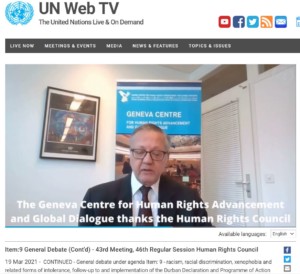 On 18 March 2021, the United Nations Human Rights Council held a General Debate under Item 9 “Racism, racial discrimination, xenophobia and related forms of intolerance”. Apart from Member and Observer States, 59 civil society organizations took the floor to deliver oral interventions, including the Geneva Centre who was the first organization on the speaking list.

Dr Umesh Palwankar, the Geneva Centre’s Executive Director, delivered a statement on behalf of the Centre:

“The Geneva Centre for Human Rights Advancement and Global Dialogue thanks the Human Rights Council for the opportunity to express its views on an issue which represents a negation of the inherent dignity, and undermines the equality, of all human beings.

In these tumultuous times, contemporary forms of prejudice and intolerance, characterized by systemic racism, are countering endeavours to move towards a more just and peaceful world. Two decades after the DDPA, the sweeping rise of intolerance and racism worldwide has continued unabated and resulted in a toxic environment where the spread of hatred, bigotry, racial profiling and the fear of “the Other” has become a daily reality. Manifestations of systemic racism affect the targeted in almost all walks of life, among which education, employment, housing, access to justice, to health care, especially in this Covid era. Systemic racism is further nourished by disparities in enforcement policies and a selective absence of accountability.

No one in the world ought to fear for their lives or their livelihoods solely because of their race, colour or ethnicity. The fight against racism and intolerance demands prompt and sustained action, undertaken with a sense of unflinching purpose. Education, communication and empowerment have a crucial role to play, as their collective synergy can produce transformative change. Governments and civil society need to unite their efforts to enforce all rights and duties of people on the basis of their role as rights-holders, while preserving ethnic and cultural diversity.

Compassion, inclusiveness, respect and solidarity are the true gateways to just and peaceful societies.”