OPPORTUNITIES AND CHALLENGES FOR WOMEN’S EDUCATION IN THE ARAB WORLD 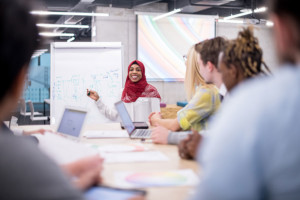 The Geneva Centre hosted a panel discussion at the side-lines of the United Nations Human Rights Council to discuss the opportunities and challenges for women’s education in the Arab World.

Dr Sob opened the session and reflected on the importance women’s access to quality education in the Middle East, particularly given the polarity between the substantial progress made by many GCC countries and the increasing attacks on women’s right to education in other parts of the region.

Ms Al Basti outlined the progress made in women’s education in the UAE and reaffirmed her commitment to improving gender equality in the region. She noted that women occupy seven seats in the UAE’s National United Council and they occupy sixty-six per cent of jobs in the civil service. She also reflected that the high percentage of female university graduates in the UAE (over 60%) can be attributed to both high levels of societal support for female education, and men’s preference for entering the armed forces rather than tertiary education.

Dr Kotrane reported that only two countries in the MENA region have currently achieved equality in both primary and secondary education; the UAE and Jordan. He noted that while all constitutions in the Arabic region incorporate the right to education, this has not resulted inadequate education for women in the vast majority of cases and that gender-sensitive data on education needs to be collected and acted upon as a matter of priority.

Ms Nwabuogu outlined the human rights-based approach to gender equality and education. She emphasised that all forms of education – both formal and informal – need to be accessible and adaptable to women, and noted that the Universal Periodic Review process has led to major advancements in this regard. She highlighted that levels of illiteracy are still high, and access to education still represents a problem. Furthermore, the data on the matter is often outdated. The need to be sensitive to compounded forms of discrimination highlights the interrelatedness of human rights, all needed in order to support each other.

Dr Salama highlighted how women’s rights represent a crossroads of civil and political rights, and it is important to protect them because of the impact they have on their children as mothers, with a long-term objective of an improved society. He then recommended the national commitment to the international guidelines from the General Assembly, which should represent a starting point for a national, strategic capacity-building program.