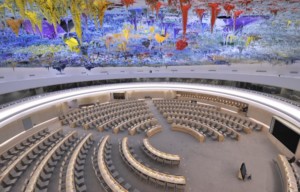 As for the previous sessions, the Geneva Centre closely monitored the 46th session of the Human Rights Council (HRC). The HRC46th session was held from 22 February to 23 March 2021 and consisted of 21 interactive dialogues, six dialogues with investigative mechanisms, two enhanced interactive dialogues, country-specific dialogues, and high-level interactive dialogue with more than 130 high dignitaries who delivered a record number of statements. During the session, the HRC also adopted 14 outcomes of the Universal Periodic Review and appointed six mandate holders of special procedures and expert mechanisms. Additionally, 30 resolutions were adopted on 22-23 March 2021.

Over the course of the 46th session, the HRC considered a number of human rights issues, which included the impact of the COVID-19 pandemic on the fight against racism and discrimination, the relevance of poverty alleviation for human rights promotion, the use of the death penalty as a deterrent against crime, the combat against anti-Muslim hatred, and the protection of human rights defenders and reprisals. In parallel to these themes, the HRC addressed situations and human rights crises in the Occupied Palestinian Territory, Syria, South Sudan, Sri Lanka, Burundi, Iran, the Democratic People’s Republic of Korea, Eritrea, Belarus, Myanmar, Venezuela, and Yemen, among others.

Due to the COVID-19 sanitary restrictions, the Council operated virtually until the end of the session. The Human Rights Council Secretariat ensured that the inclusive participation of the Member States and civil society organizations was guaranteed throughout the whole process.

The Geneva Centre followed and reported on 6 panels, 11 interactive dialogues, 14 UPR Outcomes and 4 general debates. A total of 42 reports has been produced and shared with approximately 500 stakeholders on a daily basis. The Geneva Centre reports have also been featured externally by partner organisations, including by United Nations Office in Geneva Library Sources and Geneva Environment Network, coordinated by UN Environment with the support from the Government of Switzerland.