CHILDREN IN ARMED CONFLICT: THE MENA AS A CASE STUDY 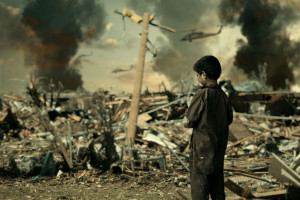 On June 30th, at the side-lines of the 29th regular session of the Human Rights Council, the Geneva Centre hosted a panel discussion entitled Children in Armed Conflict: The MENA as a Case Study.

The side-event, organized in collaboration with Union des Nations pour l’Enseignement, la Science Universelle et les Droits de l’Homme (UNESU), aimed to raise awareness and share experiences on the situation of children involved in, and/or victims of, armed conflicts, notably in the Middle East and North Africa (MENA) region. It analysed the legal protection of children in humanitarian settings by drawing from international human rights instruments and mechanisms, and stimulated discussion on good practices and challenges ahead for enhancing the promotion and protection of children’s rights during armed conflicts as well as in times of civil unrest.

“We stand today before a world devastated by war and turmoil. A world where violence strikes places of worship, schools, markets, camps and more. The real tragedy is that, despite our many efforts to stop this, we are still unable to protect the most vulnerable: our children. In the devastation that accompanies such conflicts, children are the most affected segments of the population and represent the main victims of organized violence”. – Stated Dr. Hanif Al-Qassim, Chairman of the Geneva Centre’s Board of Management, in his opening remarks.

On the podium, to address the audience from a professional perspective were: Ms. Audrey Rinaldi, Human Rights Officer at the OHCHR; Ms. Sophie De Coninck, Technical Specialist on Child Labour in the framework of the International Programme on the Elimination of Child Labour, ILO; and Mr. Armin Köhli, Programme Manager for the Middle East at Geneva Call. Their thoughtful, experience-based interventions led to a fruitful and enriching discussion with the participants, who engaged in an extremely constructive dialogue.

The Geneva Centre was proud to host such a rewarding panel discussion, and hopes that this event will represent the basis for more action-oriented measures.

COVID-19 AND RIGHT TO EDUCATION: CURRENT IMPACT AND FUTURE CONSEQUENCES

ENHANCING ACCESS TO JUSTICE FOR CHILDREN IN THE UAE

EDUCATION FOR PEACE IN A MULTI-RELIGIOUS WORLD

CHILDREN IN ARMED CONFLICT: THE MENA AS A CASE STUDY