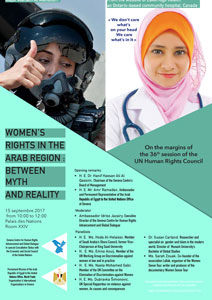 The panel discussion, organized as a side-event to the 36th session of the UN Human Rights Council, sought to objectively measure progress in the Arab region on the status of women in relation to the recent past, with a view to providing impetus for the further advancement of their status. At the same time, it aimed at bringing out the fact that the challenges that remain are shared, to different degrees, by other civilisations. This should lead to gradually deconstructing existing myths and stereotypes based on misunderstandings, prejudice or Islamophobia.

The ultimate outcome of the discussion was to collect the proceedings of the debate, the main recommendations and the most pertinent ideas exchanged during this event, into a new publication in follow-up to the study entitled “Women’s Rights in the Arab Region: Myths and Realities”, published in March 2017. The study will attempt to examine the shortcomings in the pursuit of gender equality in mainly Arab societies, against the backdrop of weaknesses that the North continues to endure in the pursuit of the same objective of gender equality.

Event Partner: Permanent Mission of the Arab Republic of Egypt to the United Nations Office, World Trade Organization and other international organizations in Geneva.