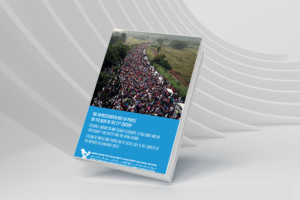 The purpose of this publication is to assess the causes and consequences of forced displacement of people on the move in Europe and in the Arab region. The first volume entitled “Migration and human solidarity, a challenge and an opportunity for Europe and the MENA region” explores the adverse impact of cross-border movement resulting from war-related insecurity and from economic push factors such as the detrimental impact of climate change. It aims to demonstrate that the migrant and refugee crisis is not a “number-crisis” as many of the European countries most hostile to the arrival of people on the move are those that have hosted the smallest numbers of migrants. Upon examination of these issues, it becomes clear that the closed border policies of advanced societies and the rise of xenophobic populism further aggravate the migrant and refugee crisis. It also highlights that armed conflict and environmental degradation in the Arab and the Sahel regions are multi-causal phenomena, forcing people to flee their home societies.

The second volume of the publication entitled “Protecting people on the move: IDPs in the context of the refugee and migrant crisis” examines the causes and consequences of internal displacement in the context of the migrant and refugee crisis. It demonstrates that the push and pull factors of forced displacement of IDPs in the Arab region exacerbate migrant and refugee inflows to Europe. Upon examination of the predicaments of IDPs in Syria, Iraq and Azerbaijan, the study demonstrates that prolonged internal displacement results in long-term adverse impact on societies from economic, social and political standpoints. In conclusion, the publication suggests that the longterm solution to enhance the protection of IDPs in conflict- and disaster-settings rests on the ability of stakeholders to develop efficient policies to prevent and reduce internal displacement.

IMPROVING ACCESS TO JUSTICE FOR WORKERS: THE CASE OF THE UAE (2019)