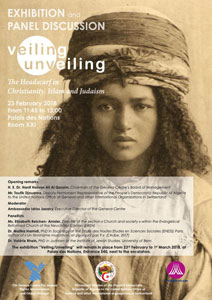 The event sought to counter misconceptions, to deconstruct stereotypes and to show the role of the headscarf as a bridge between cultures and religions, rather than as an alien practice giving rise to divergence, intolerance or exclusion. The goal was to shed light on the history and the true symbolism of the headscarf today.

Negative depictions of the headscarf, claiming it to be irreconcilable with secularity and with women’s rights, contribute to the creation of a fertile ground for discrimination and violence. As a result of stereotyping, the headscarf has become a trigger for discrimination against women in society. The exhibition and the panel debate “Veiling/Unveiling” seek to shed light on the Islamic headscarf, and to trace its joint history in the Judaic, Christian and Muslim civilizations, thus counteracting politically-driven clichés.

The main message of the panel discussion included the freedom to manifest one’s religion or belief in public or private, which is crucial to defend the right of women to choose freely to wear or not to wear the headscarf, without fearing repercussions from a legal point of view, nor any form of social opprobrium.

The only way to defend women’s rights and to promote the advancement of their status is to respect their right to choose. This event represented an encouragement to break down barriers built on prejudice and to replace the fear of the Other, with a vision that embraces the Other and celebrates diversity.

Event Partner:Permanent Mission of the People’s Democratic Republic of Algeria to the United Nations Office in Geneva.

Video Report:Veiling/Unveiling: The Headscarf in Christianity, Islam and Judaism