ISLAMOPHOBIA AND THE IMPLEMENTATION OF UN HUMAN RIGHTS COUNCIL Resolution 16/18: REACHING OUT 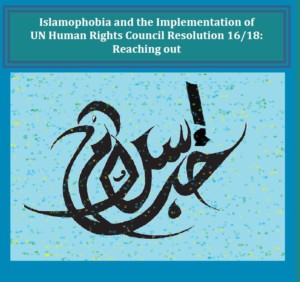 To commemorate the 5th anniversary of the adoption of the Human Rights Council Resolution 16/18 on Combatting intolerance, negative stereotyping and stigmatization of, and discrimination, incitement to violence and violence against, persons based on religion or belief, the Geneva Centre convened a panel discussion aimed at analysing opportunities and challenges ahead for the fight against the scourge of Islamophobia.

The panel discussion assessed the progress made in the implementation of Human Rights Council Resolution 16/18 and explored ways to delineate the boundaries between the freedom of expression and opinion, on one hand, and the freedom of religion and belief, on the other. The objective was to enhance peaceful harmony between these two fundamental rights, which are often presented as incompatible, and acknowledge the interconnection and interdependence between them, as well as the possibility to overcome potential challenges in their application on the ground.

By means of an objective, unbiased assessment of the phenomenon of Islamophobia, of its political and historical roots, the panel discussion aimed to analyse opportunities and challenges ahead for the fight against hatred and discrimination directed towards both Muslim individuals and communities. The ultimate goal was to assess the deteriorating situation and lay down the foundations for a collective, concerted exercise aimed at charting the way forward to overcome Islamophobia, and at following up on the recommendations laid out in Human Rights Council Resolution 16/18.

Event Partner: Permanent Mission of the Islamic Republic of Pakistan to the United Nations