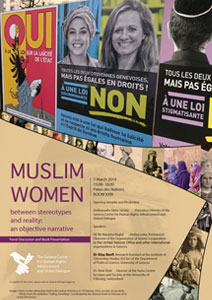 To mark International Women’s Day, celebrated worldwide on 8 March, and to officially launch its latest publications on women and gender equality in the Arab world and beyond, entitled Women’s Rights in the Arab Region: Between Myth and Reality and Veiling /Unveiling:  The Headscarf in Christianity, Judaism and Islam, issued in February 2019, the Geneva Centre organized a debate and book presentation entitled Muslim women between stereotypes and reality: an objective narrative.

The discussion expanded on the themes of the two publications, namely the status of women’s rights and gender equality in the Arab region, but also more generally, across the world, and the history and the true symbolism of the headscarf in Christianity, Judaism and Islam, the stereotypes and controversy surrounding this topic, and the recent developments in Western societies with regard to the headscarf.

The panellists discussed the questioning of the headscarf on the Western political scene, fostering or being fostered by intolerance and a rise of xenophobic and Islamophobic attitudes, encouraging the adoption of discriminatory legislation aimed at further marginalizing Muslims, particularly women; and the particular issue of gendered Islamophobia in Switzerland.

They further addressed the need to give a voice to Muslim women and to avoid State interference in their clothing choices, whether they choose to wear a headscarf or not, and to respect their rights and liberty to dispose of their bodies as they please.

Finally, the panellists stressed the need to raise awareness and encourage debates on these topics so as to deconstruct stereotypes with regard to Arab and Muslim women and to objectively educate the larger public, by facilitating their access to nonbiased information.