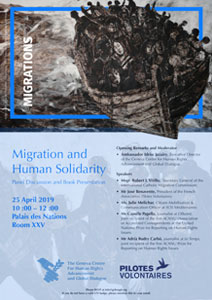 The Geneva Centre organized a debate and book presentation entitled Migration and Human Solidarity to officially launch its latest publication on the causes and consequences of migration today, including refugees and internally displaced persons, entitled The Unprecedented Rise of People on the Move in the 21st Century.

• Monsignor Robert J. Vitillo, Secretary-General of the International Catholic Migration Commission. Previously, Monsignor Vitillo served in Catholic Church-related charitable agencies at local, national, and global levels. Between 2005 and 2016, he coordinated the Caritas Internationalis Delegation to the UN in Geneva.

• Mr José Benavente, President of the French Association Pilotes Volontaires. Mr Benavente is a professional pilot with 25 years’ experience in humanitarian aid, who created this association in January 2018, with the aim of providing assistance to people in distress at sea;

• Ms Julie Melichar, Citizen Mobilisation & Communication Officer at SOS Méditerranée. Ms Melichar is an active voice in promoting the work of this humanitarian association dedicated to the rescue of persons in distress in the Mediterranean Sea. SOS Méditerranée is well known for chartering the Aquarius until a forced end was put to the ship’s activities in December 2018. Ms Melichar previously worked on board the Aquarius as research and evidence officer.

The hostility towards migrants and refugees in European societies is increasing, while this issue is manipulated for political ends, resulting in particular from the rise of populist movements and the exacerbation of xenophobic, particularly Islamophobic, sentiment. The criminalisation of migration and of solidarity is growing in the context of today’s crisis. The role of civil society in promoting the respect of human rights of migrants, refugees and asylum-seekers is ever so important, just as the multilateralism and international cooperation in the context of this crisis are.