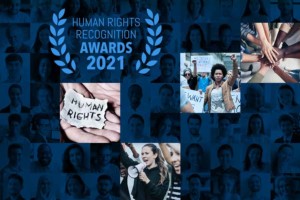 Human Rights Day is observed every year on 10 December — the day the United Nations General Assembly adopted, in 1948, the Universal Declaration of Human Rights (UDHR). This milestone document proclaims the inalienable rights which everyone is entitled to as a human being – regardless of race, colour, religion, sex, language, political or other opinion, national or social origin, property, birth or other status.

The Geneva Center has chosen this day to celebrate individuals with distinctive work in the field of human rights advancement, through its Human Rights Recognition Awards. The awards were presented to four recipients Ms. Hira Amjad, the Co-founder and director of ‘DASTAK Foundation’ from Pakistan. Ms. Casey Myers is the founder and executive director of ‘One Digital World’. Ms Molly Namirembe, former child labourer and a young human rights activist from Uganda and Mr. Sayed Ahmad Masoumi, an Afghan gender equality activist. During the online ceremony held on 10 December, Awardees received their prizes and were given the floor to present their initiative and their work in the advancement of human rights.

The online ceremony was held on 10 December at 12:10 (Geneva time, CET). Awardees received their prizes and were given the floor to present their initiative and their work in the advancement of human rights.

Ms Hira Amjad (Pakistan): She is the Co-Founder and Director of ‘DASTAK Foundation’ in Pakistan. She has been working for prevention of gender-based violence and the promotion of women’s rights since 2014. Her DASTAK initiative aspires to strengthen gender-based violence prevention through creating platforms to educate women & young girls regarding their bodily autonomy & rights. Although based in Islamabad, the Foundation works throughout Pakistan with its network of implementing partners.

Ms Molly Namirembe (Uganda): She is a former child labourer and a young human rights activist. Her projects aims at the elimination of child labour and child trafficking through advocacy and empowerment of children and youth in Uganda. Molly is now actively involved in global efforts to combat it. She successfully led the implementation of different interventions including the withdrawal of children from gold mining sites, their rehabilitation, skilling, and provision of start-up kits for to promote decent work.

Ms Casey Myers (United States): She is the Founder and Executive Director of ‘One Digital World’, a non-profit organization that connects, educates, and empowers refugees and asylum seekers worldwide, through technology and digital education. Her organization has helped refugees and asylum seekers from 11 countries. It also provided computer access to over 2,000 people and currently provides free classes 5 days per week that empower self-reliance and integration.

Mr Sayed Ahmad Masoumi (Afghanistan): He is active in promoting gender equality in Afghanistan. He developed the Rural Women’s Entrepreneurship project and submitted it to UN Women for funding. He helped design the Rural Women’s Entrepreneurship project to support women with a new set of skills such as business development, how to sell, marketing, social media, and product packaging. His next initiative is to support Afghan women and girls through creating awareness-raising videos to put pressure on the Taliban to ensure women’s rights.

Full video recording of the ceremony: