HUMAN RIGHTS AND THE COVID-19 CRISIS: IMPACTS, CHALLENGES AND OPPORTUNITIES 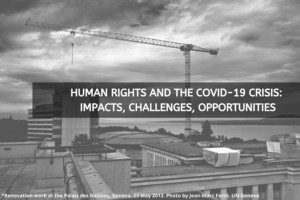 The Geneva Centre is an independent think-tank having consultative status with ECOSOC. Established in 2013, it is dedicated to the promotion of a universal, value-driven human rights system, anchored in the principles of equity, non-discrimination, inclusiveness and solidarity. The Centre thus offers a platform to foster inter-cultural, inter-religious and inter-civilizational dialogue, aimed at enhancing mutual understanding, cooperative relations between peoples and the celebration of diversity. In this framework, the Geneva Centre wishes to succinctly share some of its observations on the impact of the Covid-19 crisis on equality and non-discrimination, the challenges faced in their protection, and future opportunities for promoting human rights of citizens world-wide, including the related strengthening of multilateralism, leadership and global cooperation.

The pandemic has given rise to a differential crisis between haves and have-nots which is drastically increasing inequalities. Fundamental human rights, including the right to health, education, access to justice and, more generally, the right to equal treatment, have been deeply affected by the pandemic. The effects have been particularly felt by vulnerable and marginalized groups, such as women, children, elderly people, ethnic and religious minorities, people with disabilities, people belonging to LBGTIQ groups, migrants including workers, refugees and stateless persons.
Ethnic and religious stigmatization has spread across Asia, the Middle East, Europe and the US, with a rise in racism, xenophobia, hatred, verbal and physical abuse, threats and boycotts against specific groups simply because considered to be responsible as bearers and spreaders of the virus. Such stigmatization has driven people to hide their illness for fear of humiliation, preventing them from seeking health care, and furthermore caused dramatic disruptions of social and religious practices. This is compounded by the fact that access to reliable information has been difficult, while many media sources have lost their objectivity and rationality, thereby issuing biased reports that have contributed to promoting stigma and fear. Furthermore, extended restrictions on the freedom of movement, with fines, have acutely hampered mobility.
Women and children have been severely affected by the exacerbated inequalities. Women have suffered disproportionately by the pandemic-induced confinement, in particular from gender-based violence. Furthermore, working women have had to juggle with professional and household obligations, and have suffered from job losses as over half the world’s female workers are in the informal economy with no social security net. Children have been greatly affected by school closures. They have suffered from severe limitations and inequalities in online education, and in many cases have had to endure domestic violence and abuses, with despairingly little opportunity for redress.

Fundamentally, the current crisis epitomizes the fact that the old is dying and the new cannot yet be born. Multilateralism has lost its bearings, and the most obvious symptom of this is the painful inability of the struggling international community to address widespread violations of human rights in any meaningful way. In parallel, populism, nationalism and jingoism are advancing the world over. The combined result is that humanitarianism is in retreat and its mobilizing force is fading. As we find ourselves between the increasing pessimism of objective analysis and the ebbing optimism of the global will, we need to identify wherein dwell the forces for change and how to harness them. There is a vital need to address and overcome a generally prevailing deficit of trust, to re-invent and reinforce international solidarity. States and civil society have imperatively to address the systemic discrimination which feeds inequalities, and undertake a renewed commitment to the elimination of all forms of discrimination. More specifically, in regard to human rights violations, there is need for a transparent and constructive dialogue and to reverse the rising trend of impunity, through the establishment of accountability parameters, of independent monitoring and review mechanisms, indeed of a veritable democratization of accountability, to generate policy responses in keeping with international standards and in which civil society organizations have a vital role to play. There is also clearly a need for appropriate communications policies and strategies, reliable, scientific methodologies of data collection and objective reporting, to avoid biases through ambiguities and discriminatory patterns.

It is a truism in international relations that transformational change comes only in the aftermath of a devastating shock. In this perspective, the current crisis contains the potential to provide the necessary impetus for greater democratic governance and protection of human rights. In relation to the protection of human rights and the State-Individual dichotomy, the answer to finding the adequate balance between the duties and the rights of citizens could be sought in the reinforcement of dialogue and solidarity horizontally, between citizens themselves, and vertically, between citizens and the State. The crisis is also an occasion to redress deep-rooted structural gender inequalities and empower women in all sectors of society. And to bridge the widening chasm between youth and public institutions by offering concrete hope for achieving goals and prosperity. International and cross-sectoral collaboration has also become an acute necessity to reconstruct the new multilateralism, in support of human rights and the SDGs. The current crisis has highlighted the need for mechanisms to foster global dialogue, understanding and active coordination. In this regard, it would be timely to revisit one of the recommendations in the outcome declaration of the World Conference on “Religions, Creeds and Value Systems: Joining Forces to Enhance Equal Citizenship Rights” organized by the Geneva Centre in June 2018, namely the setting-up of an international taskforce composed of representatives of Governments, International Organizations, NGOs, Faith-Based Organizations and community leaders to harness the power of the shared values of humanity and of all its religions and cultures for the universal enhancement of equal citizenship rights, thereby remanding the very notion of ‘minorities’ to the dustbins of history.

The Covid-19 crisis has given rise to an incredible coming together, which can be cultivated in a spirit of collective responsibility of all, towards all. This is a unique opportunity for drawing lessons and sharing good practices to guide future, concerted efforts to protect and promote human rights.

Solidarity, even through enlightened self-interest, Inter-cultural Dialogue, Inclusiveness and celebration of Diversity, are the pathways towards a universally enriching humanity.

HUMAN RIGHTS AND THE COVID-19 CRISIS: IMPACTS, CHALLENGES AND OPPORTUNITIES