EMERGENCY ASSEMBLY ON THE RISE OF GLOBAL RACISM 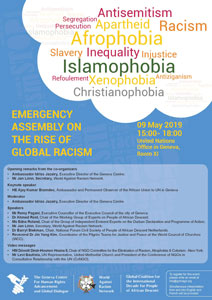 An Emergency Assembly on the Rise of Global Racism was held at the United Nations Office in Geneva in the presence of more than 150 representatives of Permanent Missions, UN staff, civil society and academics.

The aim of this Assembly was to invite the international community to take a joint stand against racism, racial discrimination and intolerance and to address the fundamental structural root causes of these scourges through robust and universal implementation of the Durban Declaration and Programme of Action (DDPA).

It served as a timely opportunity to give a new impetus to ongoing efforts to counter the rise of extremism and xenophobia in all its forms and manifestations, which is taking openly aggressive forms expressed through Islamophobia, Afrophobia, anti-Arabism and anti-Semitism. The terrorist attacks of 15 March 2019 in Christchurch, New Zealand and of 21 April 2019 in Colombo, Sri Lanka as well as in California on 27 April 2019 are a reminder that the rise of hate and supremacist ideologies erupts into blind violence unexpectedly.

The assembly was held strategically in between two important events in Geneva that brought international participants to the UN on the issue of racism. In its 6-9 May 2019 session the Group of Independent Eminent Experts discussed the continued relevance of the DDPA and the process towards commemorating its 20th anniversary. On 10 May 2019, OHCHR organized a consultation on a Permanent Forum on People of African descent which should become an integral part of the full and effective implementation of the DDPA. In this connection, the Emergency Assembly was a public platform to energize international action against racism and to influence the Human Rights Council and General Assembly to give increased priority to the work against racism in its resolutions to be adopted during 2019.

The Ambassador Idriss Jazairy, Executive Director of the Geneva Centre served as the panel moderator. The panel was opened by introductory remarks made by Mr Jan Lönn, Secretary, World Against Racism Network.

(1) HE Refiloe Litjobo, Ambassador and Permanent Representative of Lesotho to UN in Geneva and Chair of the Intergovernmental Working Group for DDPA implementation (Keynote speaker);

(2) Dr Ahmed Reid, Chair of the Working Group of Experts on People of African Descent;

(3) Ms Edna Roland, Chair of the Group of Independent Eminent Experts on the Durban Declaration and Programme of Action;

(7) Mr Levi Bautista, UN Representative, United Methodist Church and President of the Conference of NGOs in Consultative Relationship with the UN (video message).

At the Emergency Assembly, the co-organizers highlighted that the pursuit of the International Decade for People of African Descent and the establishment of the Permanent Forum on People of African Descent should not be seen as a substitute for the DDPA. These frameworks should instead complement existing mechanisms related to the implementation of the DDPA, its programme of activities and the Independent Eminent Experts’ recommendations to achieve full and effective equality.

In her statement, Dr Roland observed that the Sustainable Development Goals (SDGs) do not mention the ethics and issues of racism which represent an impediment to development. Dr Roland suggested that national governments should include this in their national SDG implementation plans provisions concerning the implementation of the DDPA. She likewise stressed the need to develop a multi-year outreach programme to implement the DDPA including mobilizing NGOs and seeking new ideas to fight against xenophobia, racism and related intolerance.

In this connection, the Emergency Assembly underscored the importance of a political will, unity of purpose and international cooperation in the pursuit of action-oriented recommendations to address all forms and manifestations of racism, racial discrimination and related intolerance through the implementation of the DDPA, whether the issue refers to Afrophobia, Arabophobia, Islamophobia or Anti-Semitism.

Video Report: Emergency Assembly on the Rise of Global Racism