DE-RADICALIZATION OR THE ROLL-BACK OF VIOLENT EXTREMISM 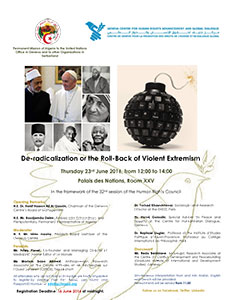 The panel debate was held on the occasion of the 32nd Session of the Human Rights Council..

Over the past years, radicalization and violent extremism have become a universal challenge for the North as well as for the South. The discussion took  place against the backdrop of the 2030 UN Agenda for Sustainable Development and, in particular, of goal no.16, which envisions promoting peaceful and inclusive societies for sustainable development and to provide access to justice for all and build effective, accountable and inclusive institutions at all levels.

The discussion revolved around two distinct concepts; radicalism and radicalization. H.E. Dr. Hanif Al Qassim, the Chairman of the Geneva Centre, as well as other participants, pointed out that “radicalism” is nothing but reverting to origin as the famous Arab proverb says; “Going back to origin is a virtue”. Caring about origin is a common intrinsic feeling shared by all people around the world, as it bonds people to their identities regardless of their personal inclinations. The phenomenon of reverting to origin exists in the West under what is known as “radicalism”, which had played an important role in ending tyranny and advancing democracy. The concept of radicalism per se does not entail violence; on the contrary, reverting to origin usually has quietist overtones. Hence, radicalism is about the freely espoused pursuit of authenticity.

Radicalization on the other hand is about the imposition of an “off- the- peg “value system and it is likely to lead to bigotry in the majority of cases. Violence starts when radicalization through hate speech replaces the low esteem of self by low esteem of others. Thus, people deprived of solid religious upbringing may be drawn to engaging in violent extremist action.

All participants dwelled on the importance of taking into account the variety of conditions prevailing in different countries to roll back violent extremism. They stressed the key role of security policies compliant with human rights to counter extremist violence policies in the short term.

H.E. Dr. Hanif Al Qassim indicated in his statement that studying all the solutions for managing this kind of crises, which is a shared concern for Islamic and non- Islamic countries, was not possible in two hours. He proposed to convene a meeting next autumn to study more at depth the way out of such dilemma. There was consensus amongst the participants supporting the fact that all basic rights had to be preserved, in the process, for concerned human beings, including violent extremists, as freedom of opinion is a basic inalienable right and so is non- discriminated.

H.E. Boudjemâa Delmi, Permanent Representative of the People’s Democratic Republic of Algeria to the United Nations Office at Geneva, in his Introductory Remarks, highlighted in his speech that his country organized an international conference on 15 July 2015 on the theme of de-radicalization and the rollback of violent extremism.

A representative from the Permanent Mission of the Republic of the Sudan to the United Nations explained that radicalization is not linked to religion; however, it is linked to politicizing religion. He also added that researchers and policymakers must consider the social and educational conditions that draw the youths to terrorist groups, analyzing this phenomenon, especially where the percentage of unemployed in the countries of the South surpasses 60 percent.

H.E. Vaqif Sadiqov, Permanent Representative of the Republic of Azerbaijan to the United Nations Office in Geneva said that radicalization did not come out of the blue, and stressed the need for analyzing the policies of some countries that according to him are part of the problem as much as they are part of the solution to the problem.

The panel witnessed a discussion, focused on finding solutions for modern societies based on the recognition of the prominent role that youths play in shaping the world’s future.

Video Report: De-radicalization or the Roll-Back of Extremist Violence

Event Partner: Permanent Mission of the People’s Democratic Republic of Algeria to the United Nations Office in Geneva.