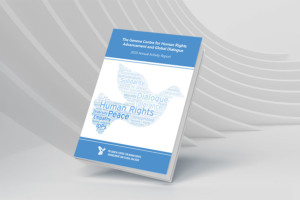 Foreword by the Executive Director

This Annual Report highlights some of our major achievements in the course of 2019. The Geneva Centre’s thematic research and publications, high-level panel discussions and debates, interactive training sessions and workshops, statements on human rights events and issues, participation in the Human Rights Council meetings, UPR sessions and international meetings, will all be succinctly and graphically presented in the report.

In my capacity as the new Executive Director of the Geneva Centre for Human Rights Advancement and Global Dialogue, I take this opportunity to announce that, following a year of renewal and recruitment, the new team is on board – and committed to writing a fresh chapter of the Centre’s endeavours.

An ambitious and innovative Strategic Framework for 2020 and beyond was adopted by the Geneva Centre’s Board during its first meeting last November. The Board members, who come from diverse professional backgrounds and geographic regions, unanimously agreed that the Centre’s priority will remain the promotion of a value-driven human rights system, through fostering international consensus – anchored in the principles of equity, non-discrimination, inclusiveness and solidarity. In the course of this year, the Centre intends to lay particular emphasis on the integration of new perspectives and dynamics, within the framework of its fundamental mission and the four pillars of its mandate: enhancing global dialogue, conducting research, raising awareness, and strengthening national capacities in human rights. We have consequently identified several salient issues which the Geneva Centre will address as a matter of priority in 2020.

Interreligious and intercultural dialogue will remain at the core of the Centre’s work. To counter the rapid rise in phenomena such as extremism, xenophobia and islamophobia among others, we will continue to vigorously emphasize the extensive commonalities and convergence which exist between the world’s major religions, with regard to fundamental human values.

Recognizing that leadership is crucial to success, in the year of the 75th anniversary of the United Nations, the cradle of modern multilateralism, the Centre will join the largest interactive dialogue initiated by the UN on the role of global cooperation and effective multilateralism in moving towards the building of peaceful and inclusive societies.

The Centre will strive to integrate into all its efforts the promotion and implementation of respect for gender equality. In view of the twenty-fifth anniversary of the Beijing Platform for Action, we reaffirm our commitment to advance the empowerment of women and girls at all levels: within families, local communities, and society at large.

In 2020, the Centre will also address the critical issue of the detrimental impact of armed conflicts and their aftermath on the environment and, consequently, on human rights. We foresee convening an international conference, in collaboration with our partners, to emphasize how conflicts can lead to significant environmental destruction, thereby amplifying human hardships and vulnerabilities.

On behalf of the new Geneva Centre’s team and Board, I thank you for standing by us last year and trust your unfailing support will continue in the years to come. In collaboration with our network of strategic partners, we will work relentlessly to achieve the Geneva Centre’s Vision of enhancing global dialogue to promote the celebration of diversity and ensure dignity for all people.